If you’re not thinking about it, you’re a rare bird indeed. In fact, you might be a little bit…um, how do we put this? Crazy. When you’re about to walk up to a check-in desk and hand over your hard-earned money to be strapped to a stranger and pushed out of a flying airplane, you need to be asking safety questions. Most people are at least sane enough to ask the major ones: Is tandem skydiving safe? How seriously does this dropzone take tandem skydiving safety? What are the risks of tandem skydiving? Others ask an even more important one: Is the benefit of making this skydive worth the risk?

We love people who ask questions. Skydiving is, after all, a risk management activity, and asking questions proves that you’re turned on and functioning correctly. To honor that, we’re here with answers. 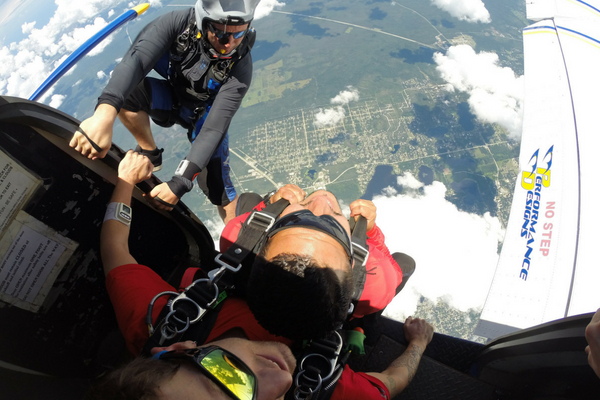 CHECK OUT THESE SKYDIVING SAFETY STATISTICS

You’ll be interested to know that the statistics have spoken in a clear voice. They tell us that the sport of skydiving is now safer than ever–and tandem skydiving is especially risk-appropriate.

The USPA (United States Parachute Association), which serves as the governing body for the sport of skydiving here in the USA, has been keeping a careful record of injuries and fatalities since well before tandem skydiving was invented in the 1980s. Thanks to that diligent record-keeping, we have a very good idea of the statistical safety of tandem skydiving.

The most up-to-date statistics come from 2014. That year, the USPA recorded 24 fatal skydiving accidents out of the 3.2 million jumps made by skydivers all over the world that year. If you run those numbers, it works out to a total of 0.0075 fatalities per 1,000 airplane exits.

That particular statistic is for sport skydiving, which encompasses all skydives made by solo licensed jumpers (weekend warriors, competitors, hobbyists, stuntpeople and YouTube video stars alike). The USPA tracks tandem skydiving separately, and you’ll be pleased to know that it has an even better safety record, with just 0.003 student fatalities per 1,000 tandem jumps over the previous decade. Pretty cool, huh? 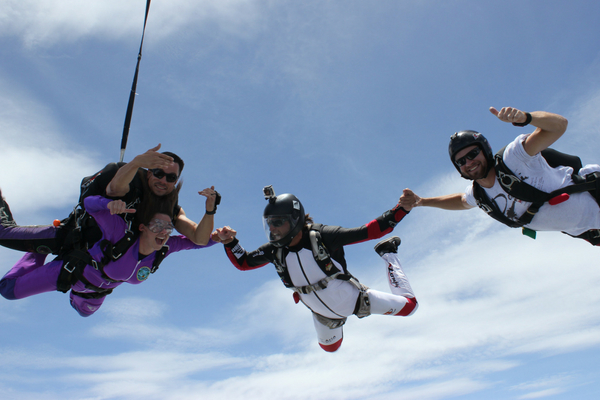 THE EQUIPMENT MAKES THE DIFFERENCE

When skydiving was originally invented, it was pretty sketch. Everybody got one round parachute on their back and another one on their stomach (more or less). The meters and gauges were big ol’ steampunk contraptions with big ol’ steampunk problems. Nobody’s parachute could get itself out if the pilot was incapacitated.

Lucky for us, all of that is different now. The long list of changes and additions to the equipment that have been made since then all collaborate to keep us safer in the sky. Now, everybody gets two square, steerable parachutes, the backup of which can deploy itself at a safe altitude even if the pilot happens to be unconscious at the time. The meters and gauges are full-on computers with full-on computer superpowers. It’s a new world up there, for sure. 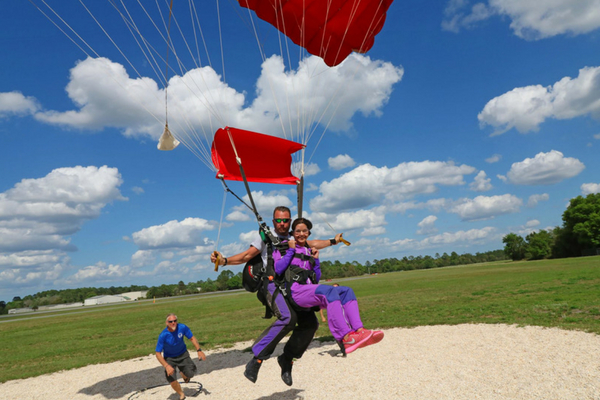 THE PILOT’S IMPORTANCE CAN’T BE OVEREMPHASIZED, EITHER.

Here’s what we have to tell you: Professionalism and reputation matters. When you make a tandem skydive in the United States (and you do so at a USPA approved drop zone), you’ll go into it with the confidence of knowing that the instructor you jump with has completed a bare minimum of five hundred jumps before she or he was even allowed to take the course. Each potential tandem instructor must then complete a long series of evaluations and exams to achieve their USPA-approved tandem instructor rating. 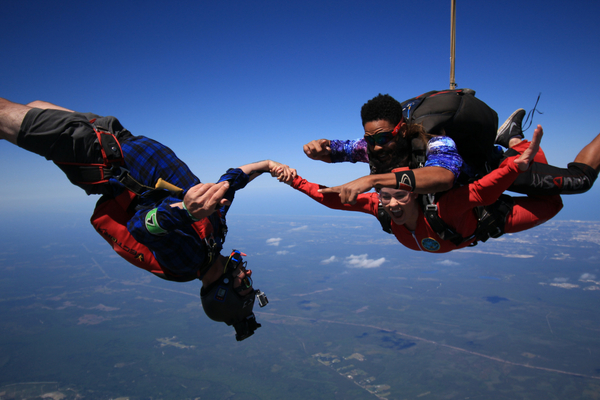 Our standards at Skydive DeLand are even higher than that. We take deep pride in our hiring practices, and we’ve assembled a uniquely talented, experienced, and professional team to serve your freefall needs.

The last–and perhaps most important–question still holds: Is it worth it? HECK YES, IT’S WORTH IT. Your biggest risk in skydiving will be bursting forth with a smile that just won’t drop from your face…and we’ll be happy to help you put it there. Come and see us today!

We have put extra safety precautions in place; Some of those measures are as follows:

All jumpers are required to wear a mask to board our aircraft and limited capacity loads are available upon request.

Signage is posted limiting the number of people allowed in enclosed spaces at one time. Surfaces will be sanitized throughout the day and a commercial cleaner will be used to disinfect all surfaces and carpets each evening.

Do not visit our location if you are ill or if you have been exposed to anyone who is ill unless you have been cleared by a medical professional.